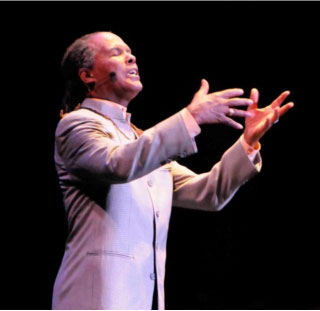 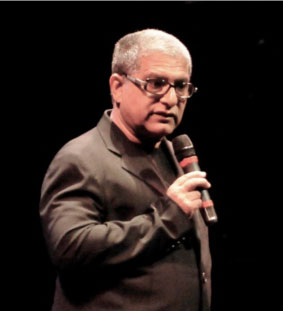 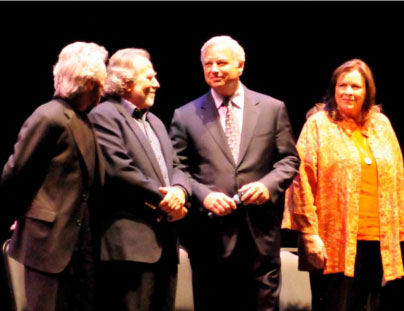 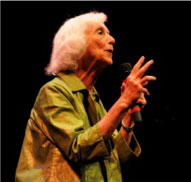 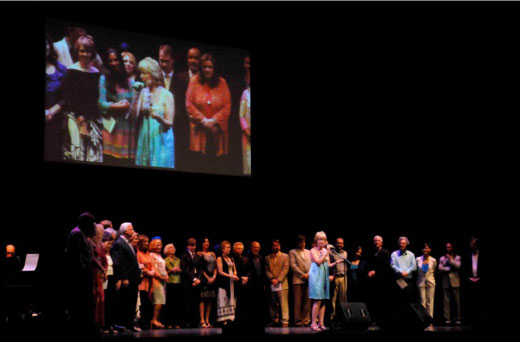 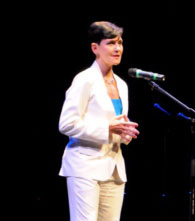 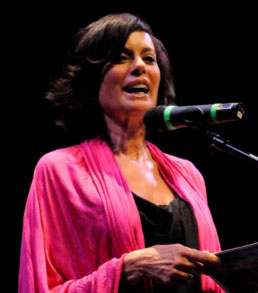 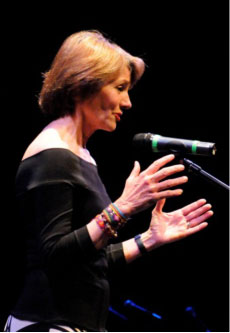 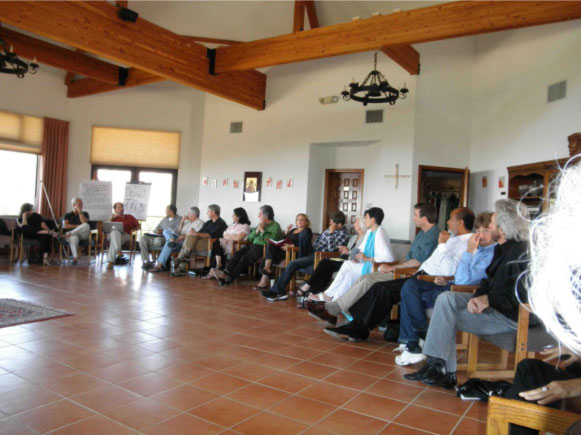 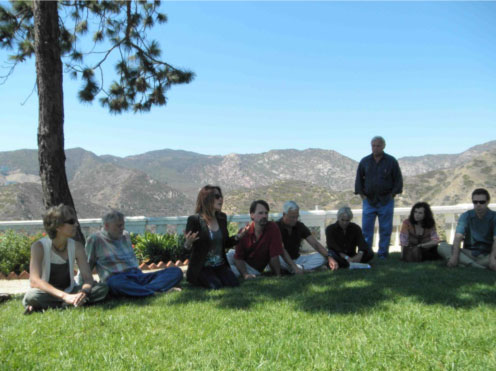 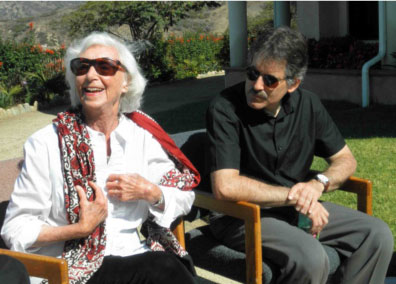 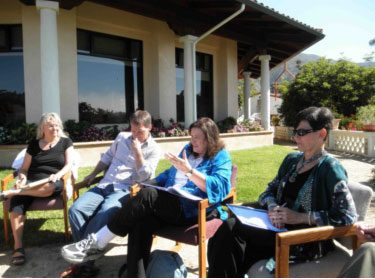 The 2010 Evolutionary Leaders Retreat at Serra Retreat Center in Malibu took place from August  30-September 2, 2010. On the 31st of August we hosted a special event at UCLA called A Call to Conscious Evolution: Our Moment of Choice. It was an evening of magic. Fifty Evolutionary Leaders came together to co-create an extraordinary experience of unity - according to the "evocation" by Rev. Dr. Michael B. Beckwith, "a leap into the possibilities that are aching to express themselves.” The field was set by music played by Rickie Byars Beckwith and the Agape Band.

The 1,500 people attending live in Royce Hall at UCLA in Los Angeles could feel the excitement, while more than 1,000 signed on to participate on line. Deepak Chopra led off by signaling the “new journey of creativity and imagination.” Jack Canfield framed the background story of this moment, while Jean Houston had the whole audience jumping for every leap in her special two-minute history of our universe. Bruce Lipton, Gregg Braden and Barbara Marx Hubbard added their dynamic presentations to help us all to understand the significance of NOW, and Marianne Williamson appeared by video to urge us to “follow the voice and call of love.” Barbara Marx Hubbard then introduced the question of the evening for all to ponder: “What will your contribution be to evolutionary leadership?”

As various Evolutionary Leaders read “A Call to Conscious Evolution,” ELs grouped around the reader of each action area, silently standing for the principles and action we believe are crucial to our next evolutionary leap. Joan Borysenko followed, asking, “What do you need to let go of in your life right now?” She said that, “Oftentimes, your true purpose comes from what appears to be a weakness in your life.” Everyone shared with a partner, including the ELs on stage.

Three powerful presentations came next from three powerful women. Lynne McTaggart invited everyone to stand and take a group intention together to “commit to becoming an evolutionary leader, to inspire other to create the world we all want.” She urged us to “feel the palpable sense of oneness in the room.” Debbie Ford then explained the vision that came to her of evolutionary leaders coming together on 11-1-11 in Washington, DC because, “We don’t want to be an ‘I’ anymore: we want to be a ‘we’.” She described various exciting projects emerging among the Evolutionary Leaders and invited everyone to join in. Finally, Lynne Twist spoke about studies of the intriguing parallels between our own time and the Renaissance, which was only 25 years long and fomented by only about 200 people at the time when the printing press was invented. She said, “There is enough love in this auditorium to change the world.”

Then it was time for music! Siedah Garrett, who co-authored “Man in the Mirror,” came on to sing her famous song. But first she offered the debut of an exquisite piece written for the occasion called “What If the Answer is Always Love?” The audience was already breathless by the time she began “Man in the Mirror,” with backup by members of the Agape Chorus. Soon all the Evolutionary Leaders were on stage dancing and singing with the audience, Rev. Michael led a closing prayer, and Siedah challenged all to action by ending with, “Evolutionary Leaders, make the CHANGE!”

A beautiful reception followed for the Evolutionary Leaders, their guests, and those who supported the event. Special thanks went to producer Dale Colton and director Emily Squires and the production team, which included Rod McGrew, Deborah Moldow, Katherine Woodward Thomas, Arielle Ford and Diane Williams, as well as the EL web team of Kim Klingler and Jennifer Walsh.

The entire event was streamed live to the more than 1,000 people who paid $10 each to view it online. Sadly, there was a serious hum in the audio. The team engaged an audio expert to clean up the sound, and the entire production was made available to those who paid to see it and to all of our EL group over two days on Nov. 19-20 (since continued music rights are an issue), and then for several days more until the end of November. Every other aspect of the production was beautifully accomplished, including a lovely, full-color program. It was a night to remember.

We had an ambitious agenda for this year’s retreat, given 15 new ELs coming into the group and a range of projects in development over the past year, including a Mapping Project, a University Project, multiple aspects of 11-1-11 (including a budding partnership with Hay House), a Vision Statement in process, and the need for more structure and support for the container holding all of this.

Diane Williams and Gerard Senehi of the Retreat Planning Team opened the retreat by welcoming everyone and giving the group an overview of the goals for the retreat. We heard a presentation by Barbara Fields of an impressive computerized mapping process she and the Mapping Project Team, including Barbara Marx Hubbard and Gordon Dveirin, assembled from the results of questionnaires the ELs answered about many aspects of our work, including the emergence of common evolutionary memes. Barbara Marx Hubbard asked the group “What does it mean to be an Evolutionary Leader in service to Conscious Evolution?” Lynne McTaggart helped us set an intention for our time together, and Jean Houston led us in an exercise of creative expression.

We were then led through a Mapping Process where we had the opportunity to converse with others in our field. The Vision Statement Team, including Katherine Woodward Thomas, Ashok Gangadean, Michael Beckwith and others, helped us to gain clarity on our collective vision. Duane Elgin, Barbara Marx Hubbard, Barbara Fields and Tom Zender gave us an overview of what an EL University would contribute to our society at large. This new-paradigm educational framework for our EL community of thought leaders elicited an enthusiastic response.

Joan Borysenko facilitated a lovely deep dialogue on Day 3 as well as helping to facilitate an Open Space process so that we could dialogue and plan in small groups. Carter Phipps helped us debrief our Public Event, and Stephen Dinan, Nipun Mehta and Rinaldo Brutoco opened up a conversation on partnering with like-minded groups. We met Nancy Levin, Director of Programs at Hay House, and heard their sincere desire to partner with us in 2011 for a conference in Washington, DC., while Debbie Ford reminded us of the many aspects of the 11-1-11 vision that had emerged at the previous year’s retreat.

Marianne Williamson led us in a beautiful meditative process on the lawn of Serra Retreat Center. An acrobat brought to charm us by Fred Matser showed us that our true potential as a human being was beyond what most of us think is possible.

On the last morning, James O’Dea led us in a meditation before Mark Gerzon helped us to re-focus on why we had gathered together. Based on the input from the process he led, asking “If you could have the entire group discuss one question to help the ELs chart our future course of action, what would it be?”, we divided into four Inquiry Groups, through which leadership emerged:

WHAT IS CONSCIOUS EVOLUTION? IS THERE A TRIGGERING IMPULSE OR SEED CRYSTAL (SPIRITUAL IGNITION) THAT WE CAN NAME, SUPPORT, AMPLIFY, SEND OUT?

HOW CAN WE PLAY ON THE WHOLE KEYBOARD OF HUMANITY?

HOW CAN WE BETTER UTILIZE OUR TIME TOGETHER AS ELs TO EXPLORE AND MODEL THE PROCESS OF CONSCIOUS EVOLUTION?

WHAT IS THE BEST METHOD OF EXPRESSION OF THE EVOLUTONARY LEADERS’ MESSAGE COLLECTIVELY AND INDIVIDUALLY TO THE WORLD?

The richness of these dialogues was a powerful reminder of why we had come together, as well as the depth of brilliance and compassion within our community. The Inquiry Groups pledged to carry on the conversation.

Rinaldo Brutoco, Nina Meyerhof, Diane Wiliams, Deborah Moldow, Gerard Senehi and Tom Zender guided discussion around business items such as group protocols, strategic partnerships, structure of the ELs, finances etc. Jack Canfield and Fred Matser offered ideas on EL Visibility and Viability. Lynne Twist offered us a moving rationale for supporting our initiative financially, and funds were pledged from the participants. Significantly, the majority of ELs pledged at least a three-year commitment. A number of ELs stepped forward to serve on the Administrative Circle that will guide us over the coming year. There was a call for strong leadership in the person of a president, and an informal straw poll was held, where various ELs received a number of supporting votes, with Mark Gerzon topping the list.

And so it is time for us to move forward, in a balance of deep reflection and concerted action, to continue to explore what it means to be an Evolutionary Leaders and how we can galvanize the energy of all the evolutionary leaders around the world to join together in the evolutionary leap called for in these extraordinary times.

The group seemed to be naturally ready to move on from the model of stewardship shared by the three original convening organizations, which were the Chopra Foundation, Source of Synergy Foundation and the Association of Global New Thought. It was the right moment to formulate a new operating structure.

After careful consideration of the ideas that came out of the business retreat at the home of Kathy Gardarian prior to the retreat, the Source of Synergy made a proposal that was accepted by the EL Administrative Circle. The SOSF offered to hold aspects of the Evolutionary Leaders Circle as a project of SOSF, which had previously served as fiscal sponsor. SOSF will continue to organize the annual retreat, as well as basic operations such as the nomination and selection process for new ELs and the management of the website and new communications platforms. Although existing project agreements will be honored, SOSF will not manage any further projects. Evolutionary Leaders will be free to organize projects among themselves, according to guidelines that will be established by the Administrative Circle, which will now be known as EL Council of Advisors.

SOSF will report with utmost transparency all EL-related operations to the EL Council of Advisors (formerly the EL Administrative Circle), including donations and expenditures as well as all matters related to ongoing projects, such as the distribution of the funds raised by the Gulf Calls to Sacred Action.

The new Evolutionary Leaders Administrative Circle met in person immediately following the retreat and has begun meeting regularly by teleconference call. The members are:

There have been a few changes to our group of ELs. We were saddened to lose the presence of our dear Rustum Roy, who made such great contributions to the Evolutionary Leaders and all the other endeavors of his remarkable lifetime. ELs who have opted out of the group are Mallika Chopra, Leslie Elkus, Andrew Harvey and Brian Swimme. Here is the latest list:

In Service to Conscious Evolution,

Diane Williams and Deborah Moldow, The Source of Synergy Foundation

The Evolutionary Leaders Council of Advisors:

On Stage Photos by Vivien Killilea